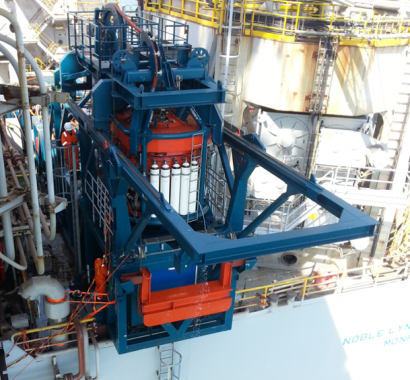 The tup diving system™ is a closed bell diving system, designed and built by n-sea. It is certified and operated in accordance with international maritime contractors association guidelines and codes of practice for offshore diving operations.

N-Sea initially created the innovative TUP Diving System™, system in 2007. This closed bell system exists to increase both workable bottom time and diver safety. In 2014, N-Sea demonstrated its on-going commitment to the future of the upstream industry by further upgrading the TUP Diving System®, resulting in a complete refit over the past 12 months.

By creating the TUP Diving System™, N-Sea has bridged a crucial gap between saturated diving and air/nitrox diving by providing clients with efficient and effective control of what is perceived as a high-risk operation.

The complete upgrade and refit of TUP Diving System™, over the past 12 months has resulted in the following innovations:

Whilst the TUP is currently utilised in a subsea Inspections, Repair and Maintenance capacity within the North Sea, it is ideally suited to shallower waters and high tidal areas where traditional forms of air diving have required multiple dives in order to complete a project.  This indicates that, for example, drilling from a drilling rig in an area such as the Southern North Sea will benefit from the maximised bottom time provided by the TUP Diving System™.