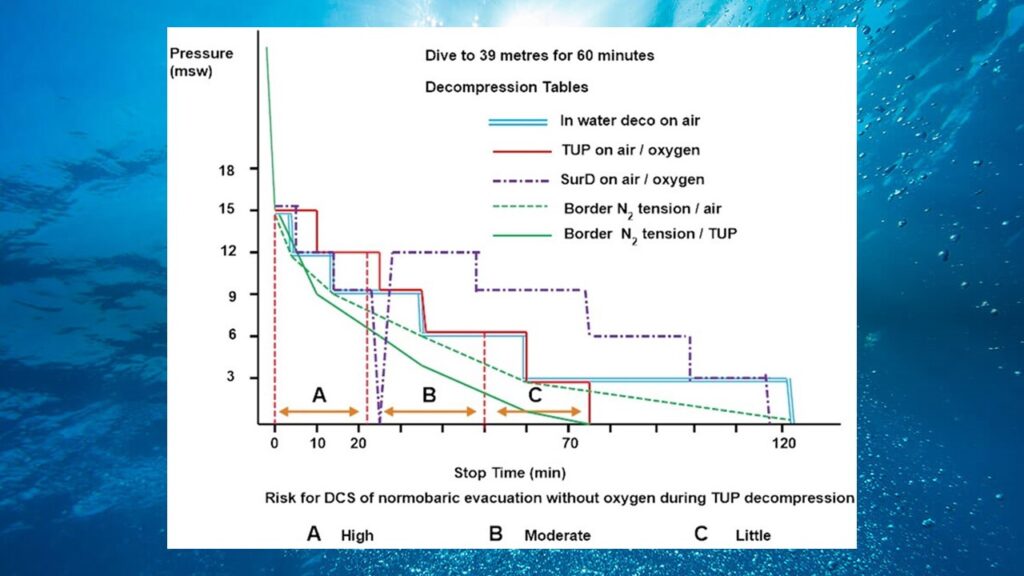 HOW TO PREPARE FOR EVACUATION WHILE DIVING WITH TUP DIVING TECHNIQUES?

Basically, there are only 2 options: hyperbaric or normobaric. The obvious safest and fastest route will always be normobaric, preferably while breathing oxygen.

The ability to perform a normobaric evacuation depends on the likelihood of the divers being confronted with a DCI during the period that they are being evacuated. Next to that the possible severity of the DCI plays a role, but this is something very hard to predict. One could assume that the more severe the N2 border is crossed, the likelier a more severe DCI could occur, However, there is insufficient data to validate this from a medical perspective.

The illustration below shows that the likelihood of the occurrence of a DCI drops considerably after each 1/3 of the planned decompression period. The vertical red dotted lines indicate these areas in relation to an Air TUP dive with an Oxygen decompression. Exemplary for the difference in safety principles is that the SI during a Sur-D dive is planned just after the period in which the likelihood of DCI is High. In our view as an experienced offshore contractor, we believe that the likelihood of a DCI and the possible severity thereof should be evaluated against the risk of the only alternative being hyperbaric evacuation.

Although today’s standards for SPHL’s and HRF is top notch, committing your divers to a bumpy 54hour ride in a confined space is never without risk. Our evaluation is that whenever the likelihood of DCI is moderate or less, the evacuation should be made normobaric rather than hyperbaric. This leaves us to determine what is acceptable and justifiable to plan for, in comparison to what we know or has been written. The decompression period for a Sur-D dive following the IMCA D014 bottom time limitations tells us that a “in chamber duration” of approximately 1 hour is accepted as the industry standard without any possibility to perform hyperbaric evacuation.

What we state is that if you can substantiate that the risk, likelihood, and severity of DCI during normobaric evacuation in TUP diving is less than the risk of the “industry standard”. There is no reason to justify exposing the divers to the risk associated with hyperbaric evacuation. The fact that the first 1/3 period of a Sur-D decompression is approximately the equal to the end of the second 1/3 period of a TUP dive, clearly indicates that even with the longest TUP decompression likely to be planned of about 100 minutes, the divers are to be obviously better off than what is accepted as the industry standard for Sur-D divers.

In comparison to Saturation diving, there is of course no discussion. The decompression border line for SAT will be approximately 9msw above a 39msw storage depth. Breaching that border line for a longer period will give the divers a risk profile much higher than in period A in the table.

That said, DMAC guidance 31 and IMCA guidance D022 hint on the fact that accelerated decompression from SAT might be considered if hyperbaric evacuation could be hindered. Obviously, the risk profile for the divers in that scenario would be unacceptable for a planned event.